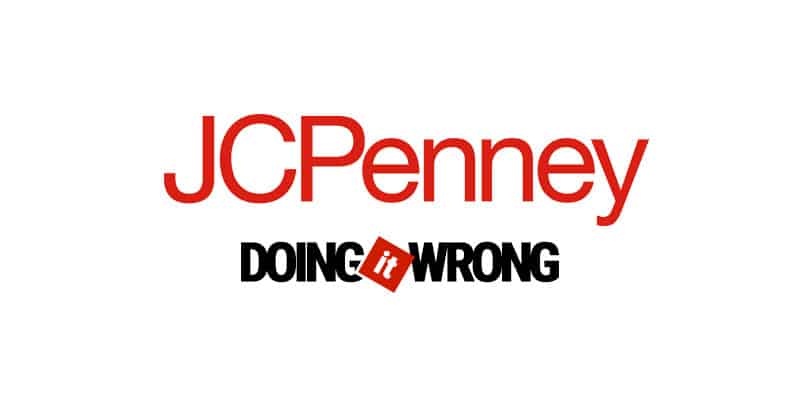 Dear JC Penney, This year was tough for you. For some reason you fell apart like an aging child star. You tried new things, and your fans hated it. No matter what, you couldn’t seem to catch a break. Some of us were never really JC Penney people to begin with, but even so, it was hard not to watch. What went wrong? Well, Let’s Begin At The Beginning. After JC Penney got rid of their catalog and a handful of stores back in 2011 they tried a completely new approach. They started out by upsetting some people at Google when they manipulated search engine indexes to bring more traffic to their site around the holiday. Google responded by reducing their visibility in searches. (Ouch) Then they brought out Ellen Degeneres as a spokesperson, but unfortunately, conservative clients weren’t pleased their choice. Their stock went down, and people left for other alternatives.

With business in jeopardy, they went back to the drawing board. They hired successful CEO, Ron Johnson. With a track record that was hard to argue with, it seemed like a good move; after all, Johnson was the brains behind Target’s rebrand and worked as VP of retail opportunities at Apple back in 2000. But his ideas may have been a little much for a lower-end department store.

A Failed Attempt To Rebrand Johnson tried to make things a little hipper. He brought in high-end brands, and set up the stores with small shops inside. His concept attempted to restructure the discount store to resemble a series of cute boutiques. The idea was that customers would enjoy hanging out and browsing. Then, he got rid of coupons and discounts by just offering a one time low price. It was a promise to pay what the tag says with no hassle. There were no fake mark downs timed alongside paydays, no promotions, just a flat price. It all works pretty well on paper, even stockholders were on board. But, millions of dollars later, Johnson is out of a job and things are worse than ever. The New Approach Wasn’t The Right Fit Clearly, Johnson’s downfall was a failure to recognize his audience, and cater to them appropriately. He had some great ideas, but JC Penney’s customers aren’t interested in high-end flash fashion by Betsey Johnson. They generally like their same old discount coupons for standard clothing and household items. Not only did Johnson alienate old customers, his ideas failed to attract new customers. How Could This Have Ended Better? One major problem was that Johnson didn’t try his ideas out on a sample of shoppers. He launched the big ideas fast, expecting clientele to bend and sway to the brand. In other words, the new concepts tried to re-train customer habits instead of simply giving customers what they wanted. Each Additional Mistake Is Now Magnified Can they recover? JC Penney began to attempt rebuilding. They brought back their old CEO, and apologized to their customers for the misstep. They’ve created apologetic commercials, billboards, and tried turning to social media for another chance.  It doesn’t seem like it’s going to be enough. The Road To Recovery Is A Bleak One. After two years of disaster after disaster, JC Penney finds itself under a microscope. Those that haven’t already abandoned the store completely are watching each little hiccup. (ie a billboard that looks like Hitler is a big deal right now). The take away: Know your customers. Listen to them. Work for them.