Survival of the Creative (est) 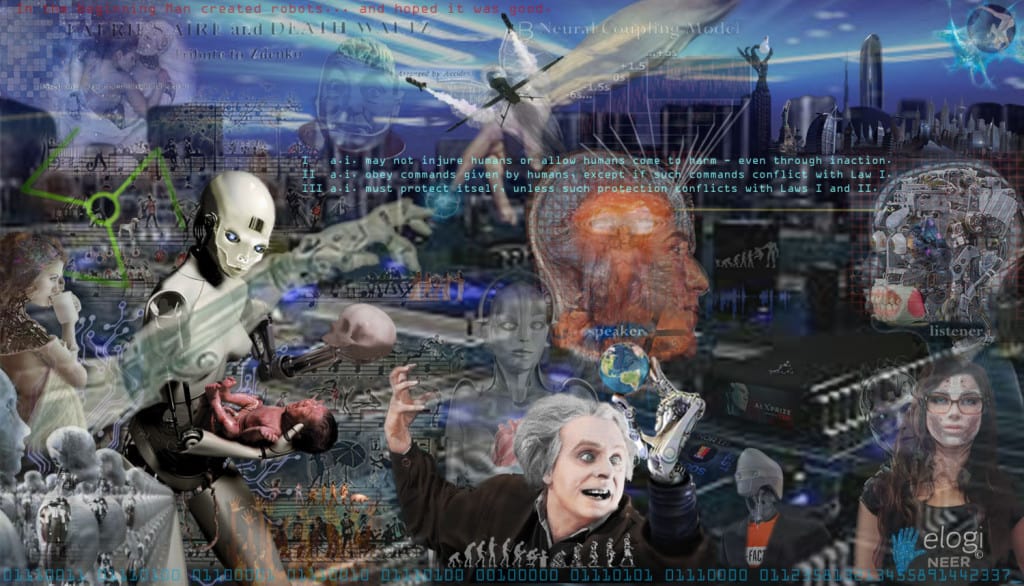 In the interest of survival, we need to face reality: Robots are taking our jobs. Given this reality, then, the burning question on the minds of the wisest future-minded folks should be:

What jobs (if any) will robots never be able to do?

While this question leads to many, many more, the most important of these is:

Are robots capable of creative thought?

Here’s why this is such an important question: From an occupational perspective, human creativity is just about the only thing (arguably) separating us from the machines we’re creating. And this same ability could be what keeps us viable in a job market where we are, to a greater extent every day, competing with the intellectual and physical superiors we’re creating.

The foundational question here is this:

What exactly is creativity or where exactly does it come from?

Some argue that it’s only a numbers game. So, if we’re able to make the database big enough, there’ll be ample “stuff” for the artificial mind to draw upon for creative ideas. That is, robots will be able to come up with ideas because ideas are just the fruits of finely tuned algorithms.

But could ideas born from binary soup ever be indiscernible from the products of a soul shaped by pain, loss, hope and fear? This is the question of the millennium.

In a recent article in The Guardian, David Cope, author, composer and professor of music at UC Santa Cruz, said, “I’ve been working on writing novels computationally for well over 10 years now. […] I believe that within the next two to three years I will have broken its back and will produce 100,000-word novels in half an hour or so, novels that I think most people would consider to be creative. I can do uncreative short stories at this point, ones where the associations are routine and expected; […] But I believe that in the near future my programs will be able to do creative ones.”

David argues that uncreative stories are “ones where the associations are routine and expected.” This implies that, to him, a creative story is one whose plot takes the reader through surprising twists and turns, demonstrating that the author engaged in divergent thinking. But is true creativity just divergent thinking applied to a lexicon of information? Or are ideas the products of a process where the pallet is a body of information transformed by the human soul, and divergent thinking is simply the paint brush? Any painter knows that the quality of the brush affects the quality of the painting. So we could argue that, though the spectrum of divergent-thinking ability is what separates the creatively gifted from the rest, all humans are creative by nature.

If then, a robot is unable to tap into the pallet of the human soul, it would stand to reason that its creative efforts will be inferior to that of even the most unimaginative human being.

Robinson suggests that divergent thinking is something else entirely—something that supports creativity but is not the essence of it.

In the talk, he goes on to describe a longitudinal study where 1,500 publicly educated kindergarten children were given a test of creativity. Those who scored within a certain range were considered to have creative genius. Of the 1,500 kids, 98% scored within that range. With each subsequent retest (one at school age and another at adolescence), the scores declined dramatically.

Though the study reveals a real problem in our education system (a topic for another article), it also gives us humans some hope for our job prospects. Based on this research, we could argue that a machine infused with hard facts and prefabricated novel connections (like each school kid in the study) might never be able to achieve true originality. After all, a baby machine, unlike a baby human, doesn’t even start out with creativity. But then, we could also argue that kindergarten-aged creative geniuses turn into fact-regurgitating automatons out of fear of failure or shame, driven by the desire for that affection that only good grades can bring—emotions robots may not be hindered by.

Mike Schaffer, the CEO here at Echo-Factory, said this: “In the media world, our lives revolve around human creativity, and to a much greater extent than the obvious visual artists and writers. Our administrative team is constantly incorporating creativity into their business decisions and organizational processes. There’s an observable difference in quality between the moves they make that come from that creative place—and a really big difference in performance between the less and more creative administrators. So, yes, could this be what sets us apart from the machines? Should we make sure that it is? Now that the A.I. ball is rolling, do we have any control over making sure that creativity remains uniquely ours? This is a profoundly relevant conversation we all need to be having.”

Yes, indeed. Because, if robots are not ultimately capable of creativity, each one of us has an invaluable commodity right between our eyes (which seems as good a place as any for the soul to reside, if, of course, you, like me, believe the soul exists at all or that creativity emerges from it). If, on the other hand, it turns out that robots are capable of creative thought, we’ve got a real problem on our hands.

Whether the “stuff” that flows from our souls will champion the cause of our future economic viability (or our position at the top of the food chain) only time will tell. Regardless, though, we’re entering into an age when, in the business world as much as everywhere else, we’ll be forced to investigate the realities of the human soul and its connection to creativity like never before.