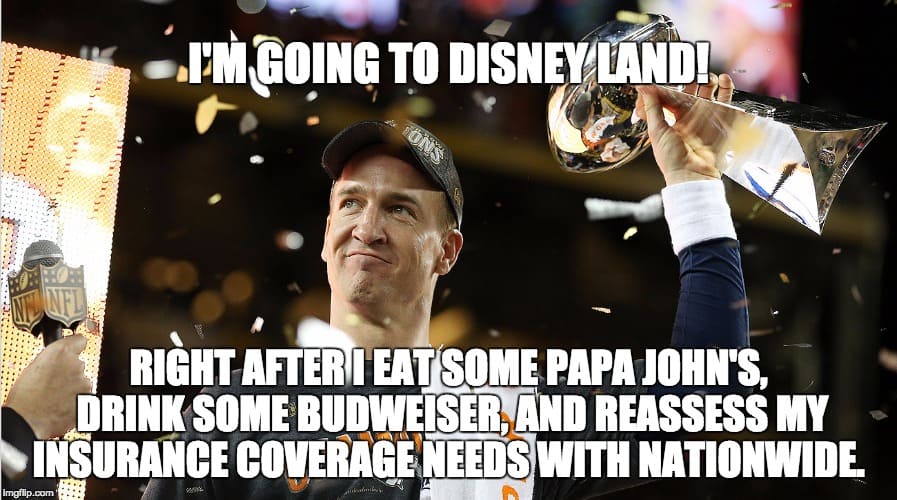 Sunday, advertisers spent a collective $377 million to get their message in front of your eyeballs during Super Bowl 50. Was it money well spent? We can’t say with any sort of empirical accuracy, so let’s go ahead and conjecture.

Get Off My Television

We’ll start with the ads we wish we’d never seen. Unquestionably, top honors here go to ads that focused on our digestive function. Sometimes it was too frequent (Xifaxan Diarrhea) or not as frequent as we’d like (OIC Is Different Opioid Induced Constipation), but either way we don’t want to hear about it. In fact, the most effective thing these ads likely did was to bring a new raft of supporters in the anti-prescription-drug-advertising-camp.

Syble was the lone voice of dissent in favor of the “OIC Is Different” ad, but I’m afraid to ask her what she liked about it, so her motivations will remain forever a mystery.

Many people (myself included) would also put Mountain Dew’s disturbing PuppyMonkeyBaby in this same category, but those people are probably unlikely to Do The Dew regardless. I think the Dew’s marketing team knows it’s demographic quite well. A Superbowl spot that disturbs that demographic’s parents is likely to make young Dew lovers everywhere chug another can in solidarity/rebellion.

So Close Yet So Far

This year, this category is dominated by Kia. Their spot has nearly everything. Christopher Walken. An Everyman in a beige suit. Fancy, retracting walls.

The only thing it doesn’t have is an effective message. I watched the spot and thought, “Yes! I should buy socks that look like monsters!” My desire to buy a Kia was unaffected, leaving it at precisely nill.

The Apartments.com “Movin’ on Up” spot gets a dishonorable mention here as well. How can you mess up Jeff Goldblum on an ever-levitating piano? By lacking any kind of clear and appealing message.

But, my personal favorite in this category has to go to Honda, for their so delightful, yet so ineffective Ridgeline introduction. We did all learn that Honda is bringing back the “Greatest Truck Ever Built That Nobody Wants to Buy”, and I for one am a sucker for talking animals (and Freddy-Mercury-aping animals all the more). But we didn’t learn anything about why we should be excited that Honda’s bringing back the Ridgeline. Well, besides the world-changing feature of in-bed speakers to entertain our sheep. I genuinely liked this spot, as did Dea, but I’m not sure it’s going to sell many Ridgelines.

It’s impossible to talk about “Almost-there” without bringing up Marmot’s intra-species love-fest. I was 100% on-board with the Marmot as an anthropomorphized brand-ambassador, right up until the creepy attempted man-to-beast smooch. If you’re trying to introduce your well-loved specialty outdoor brand to the general public, I don’t think that starting off making them feel squeamish is the right way to do it.

I’d be tempted to put Turkish Airlines beguiling yet confusing real-world/superhero mashups in this category as well, but my co-workers disagree. Mustafa picked these as his favorite (“if Bruce Wayne tells me to visit Gotham, I’m going to visit Gotham”), and Hayley was impressed with the depth of the online-aspect of the campaign behind the spots. I’m still not 100% sure if this offer is a real thing, or a clever parody, but they did pique my interest.

Not Bad, Not Perfect

Toyota tried something new with its extended story of a Prius-facilitated bank robbery. Convincing people that the Prius isn’t a completely boring car is probably worth Toyota spending $10-million on, but I’m not sure that this was the best way to do it.

Dea felt the police chase brought up uncomfortable memories from the events in San Bernardino just a few months ago, and the general awfulness of real-world police chases. I appreciated that Toyota was willing to admit to some of the car’s stereotypes, (i.e. the surprised, “This thing’s pretty fast!”), but I don’t know if it did enough to contradict them. Still, even Dea admitted that she was impressed with the demonstration of the car’s auto-braking function, and if you’re the person who was already considering a Prius, this might help push you over the edge.

The NFL’s Super Bowl babies spots have been getting lots of reactions online. Some positive, some negative. I suspect that reaction comes across demographic lines. Parents probably loved them, and children were probably uncomfortable with the thought of their own origin story. Still, everyone has to admit that this year’s NFL “Football is family” spots are far, far better than those horrible and insulting “Panthers/Buccaneers/Cowboys/Eagles” family spots thy were running last season.

Buick’s marketing campaign over the last few years could be summarized as, “Buick’s aren’t just for old people, no really, we swear.” And this year’s spot had nearly everything. A beautiful woman imitating OBJ. The actual OBJ. A Buick that looked like a car you might want to actually drive. Still, when the actor said, “I can’t believe that convertible’s a Buick,” it didn’t make me think, “Buick’s are for young people.” It made me think, “Oh, I guess that’s a convertible for old people.”

Some people have been panning the Heinz Wiener Dog spot, but that’s because those people are idiots. I was watching the Super Bowl with a number of 3-6 year olds who consume vast quantities of ketchup. They think of ketchup as not just a condiment, but as a welcome accompaniment to any meal, or a standalone right-out-of-the-bottle-when-dad’s-not-looking snack. I didn’t think it was possible to make these particular 3-6 year olds love ketchup any more. But Heinz did it.

I disliked the Dorito’s Ultrasound spot, but Carl and Syble put me in my place. Carl picked it for best of the Super Bowl, and Syble called it “brave, honest” and “a triumph for the emasculated dad.” Come to think of it, I could go for a bag of the irresistible little chemically-engineered triangles myself right now, so maybe they’re right.

Dea picked Advil’s straightforward and inspiring “we’ll help you do more, with less pain” spot for her favorite, and I can’t disagree. It helped move Advil from something you take when you’re sick, to a performance-enhancing drug. I’m not sure what the L’Union Cycliste Internationale will have to say about that, but I’ll bet it’ll be good for Advil’s bottom line.

Nicole picked the SoCal Honda Dealer’s Helpful Honda People campaign as one of her favorites. In case you were watching out-of-market like me, the campaign offered free rides home on Uber in the greater LA area after the game, in an effort to reduce drunk driving.

The spot ended with, “No Matter What Kind of Car Picks You Up, It’ll be Honda that gets you home safe.” And I have to agree that’s straight-up-brilliant. I don’t think of car dealers as altruistic people, but putting their money up to reduce drunk driving goes a long way towards changing that perception.

I, and most of my coworkers, also liked Drake’s spot for T-Mobile. It might be at least partially because when Drake said, “I love changes,” he uttered a phrase that has never-ever been sincerely stated in a creative field. Big Pink’s shots at other carriers may have been a bit ham-handed, but Drake and awful dancing saved it.

Nobody had anything negative to say about Helen Mirren (and who could honestly say anything bad about the world’s most attractive 70-year-old) and her anti-drunk-driving PSA. Though after Payton Manning ruined what should have been one of the most pivotal moments of his career by forcing in 2x Budweiser mentions, I think we were all annoyed with the beer maker that sponsored Hellen’s PSA. Also, you’ll notice that at the end of the PSA, Hellen almost-but-not-quite takes a drink from the Budweiser bottle in front of her. Some people might say that’s because Budweiser has to follow laws in the United States that prohibit actually showing people drinking alcohol during beer ads, but I’m 100% confident that Hellen never has, nor never will touch the stuff. Because her tastebuds #GiveADamn.

Both Audi and Acura’s ads got plenty of love from our agency, and I loved them as well, but I think they were too similar to be effective. Acura promoted their supercar with the help of high tech materials and Eddie Van Halen, Audi promoted their supercar with the help of a depressed astronaut and David Bowie. I even heard the morning newscasters on my local radio station confuse the spots, and talk about how great the ad with the Acura and the astronaut was. I’d take either car, and I enjoyed both spots, but I’m not sure that either will do much to move the dial for either carmaker’s bottom line.

Hayley called out the TurboTax.com Anthony Hopkins spot for brilliance. Her nomination is supported by an unexpected source. I had a satellite TV installer at my house this morning, and he walked in to my office while I was reviewing some of Sunday’s ads for this article. He asked if I “just sit around and watch YouTube all day?” Then, unimpressed with my answer, he went on, “Yeah, whatever. That spot with the cannibal guy for that tax stuff was hilarious.”

Who am I to disagree?

Sunday, there were entertaining ads. There were effective ads. But nobody combined the two better than Hyundai. The automaker’s night started off demonstrating their automatic-breaking system with the help of a world filled with Ryan Reynolds (that’s the plural, not singular “Reynolds”), then showed off its car finder feature with an overprotective Kevin Hart and finally emphasized it’s voice-activated-starting feature with the help of some hungry Grizzlies.

The ads were fun, and combined, showed that Hyundai’s building cars with innovative and (possibly) useful features.

I first picked up on the fact that Hyundai knew their way around making vehicle at the LA Auto Show a few years back when I got a massage from the back-seat of an Equus.  That back seat felt more comfortable than the back seat of the S-Class I sat in that same night. Seems like the automaker’s doing a good job of communicating that sentiment to the general public.

Or Are We all Losers?

When I canvassed the office for reactions to Sunday’s $377 million spectacle, the first reply I got was from Mike. “Didn’t watch any ads. Too busy on my phone during commercial breaks to pay attention to the TV. Sorry advertisers.”

I’m not sure if Mike’s making a point about the growth of digital media and death of broadcast, or crying out for help with his debilitating smartphone addiction.

Either way, I expect he’s not alone.